Five chairlifts are in operation in Špindlerův Mlýn – one six-seat (RWE line Svatý Petr), three four-seat (Medvědín, Hromovka and Labská) and one two-seat chairlift (Svatý Petr) as well as 12 ski lifts (in Horní Mísečky, Stoh, etc.). The total transport capacity is at least 18,000 persons per hour, who can then ski on 25 km of maintained downhill courses. A uniform fare applies throughout Špindlerův Mlýn. The Svatý Petr, Medvědín and Labská ski areas are also interconnected with one another with a regular Ski Bus. 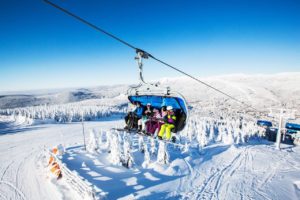 Svatý Petr is the most notable centre for sporting events in Špindlerův Mlýn. It is the venue for many notable sporting events every year. Two chairlifts are in operation in the winter season in the Svatý Petr ski area – 6-seat RWE line Svatý Petr chairlift – Pláň and a 2-seat chairlift on a FIS World Cup black piste. In addition, there is a ski lift in the upper part of the black piste. Svatý Petr offers high-quality downhill courses with artificial snow-making maintained on a daily basis for both demanding skiers and beginners. The local downhill courses are of the highest quality in the Czech Republic in regards of the length of elevation difference and maintenance. The snowpark including a U-ramp is also very popular. Pláň is also an ideal starting point for ridge hikes. 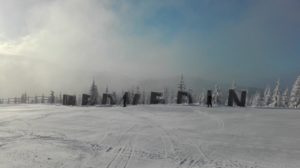 The Medvědín ski area, which is connected to the Horní Mísečky ski area by a chairlift, is increasingly sought out by skiers who like relaxed skiing on sunny slopes. It features a very good black and red downhill course that is particularly designed for sports skiing. 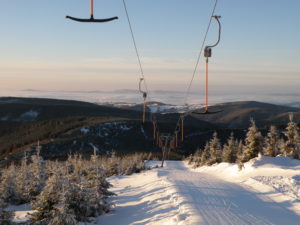 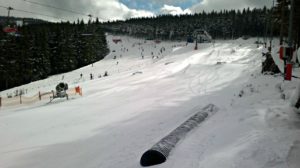 A new 4-seat chairlift at Hromovka and a significant expansion of the piste at Hromovka have increased the quality of skiing at this location and sped up the transport of skiers from Hromovka to Svatý Petr. The longest hours for evening skiing in the Czech Republic are in operation at Hromovka. There are snow-making facilities in operation throughout its length of 1,500 metres, and high-quality lighting allows for both great evening skiing for the public and for holding FIS races under floodlights. Evening skiing starts in the Christmas holidays, depending on snow conditions, and is in operation every day from 6 to 9 pm.

The newest Labská ski area was built on the route of an original Labská ski lift. The route of the new chairlift was extended by 300 metres compared to the original one and so it now leads all the way to the cross-country skiing trail to Horní Mísečky. The downhill course was also extended and expanded and complete technical snow-making facilities have recently been installed on it. We recommend the site for family skiing on sunny downhill courses, an advantage being the possibility to buy cheaper regional ski passes. 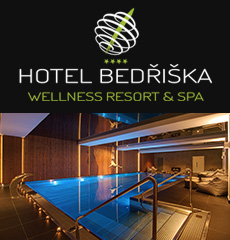